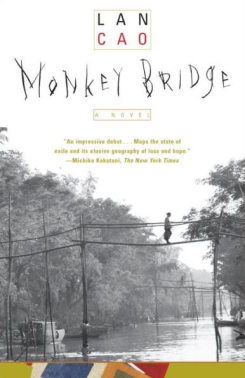 By Lan Cao
Published by Penguin Books
Buy from:

Reviews and Media for Monkey Bridge

A monkey bridge is a slender bamboo bridge used by the Vietnamese in rural Vietnam to cross rivers and canals. Monkey Bridge is a story of crossings – the crossings that refugees and immigrants, often living marginal lives, make as they navigate into the dead center of the American Dream; crossings that the traumatized, still living in a waste land of loss and war, must make to find home and peace; and crossings that mothers and daughters, parents and children make across cultural and emotional dislocations to reconnect to each other.

Monkey Bridge tells the story of Mai Nguyen, a Vietnamese girl who was sent to America before Saigon collapsed to live with an American soldier her family befriended. Her mother also managed to escape but in the chaos of the final hours, left her own father behind. In Northern Virginia where Mai was reunited with her mother, both struggled to forge new lives – Mai in seeming pursuit of a new, Americanized life and her mother in tentative steps marred by memories of a fallen world and remorse over the abandonment of her own father in Vietnam. When her mother fell ill, Mai began to search for her grandfather’s whereabouts, hoping that the answer would relieve her mother from the unbearable pull of the past. Her search, however, led her to discover a series of letters from her mother and in the process, opened her up to a world of war and violence, love and sacrifice, fidelity and coldblooded revenge.

Monkey Bridge is about a Vietnamese family in America. It is about Vietnam, not just a Vietnam synonymous with the war in the American consciousness, but rather, a Vietnam rich with its own rich and independent history. 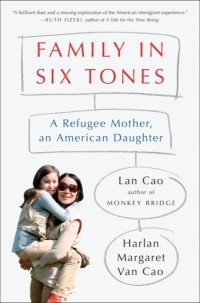